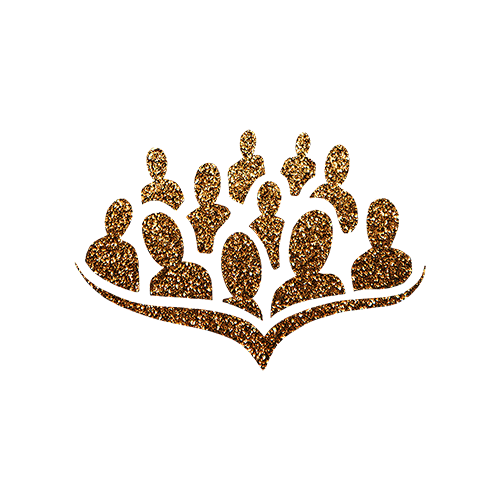 Founded as Birmingham Choral & Orchestral Union in the 1880s, ours is one of the longest established choirs in the Midlands, making music over three centuries. We have appeared in many venues in Birmingham and beyond, from canal sides and rooftops, golf clubs and care homes, to churches, schools and world class concert halls.

We have also appeared on The Archers on BBC Radio 4! Performances have included the world première of Peter Wishart’s Te Deum, first public performances in Birmingham of Gordon Jacob’s A Nun’s Priests Tale, Carl Orff’s Carmina Burana and Richard Chew’s Webb Dives In. Our archives contain a full history of concerts since 1946. 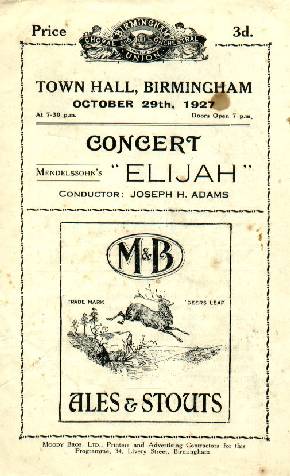 Much of the recorded history of Birmingham Choral Union prior to World War ll has sadly been lost but occasionally reminders of its earlier existence turn up. A member who bought some music in a local shop found inside it a programme for a Birmingham Choral Union performance of Merrie England on 24 January 1914. It listed the names of all the members of the choir – 126 Sopranos, 111 Contraltos, 51 Tenors and 68 Basses – a total of 356 singers! The cover described it as the third concert of the 27th Season. 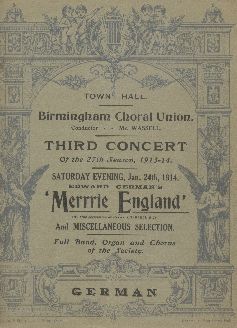 Appleby Matthews was the choir’s director, and founder of the C.B.S.O. His ambition to conduct a performance of The Dream of Gerontius with both choirs was realised at Birmingham Town Hall on 7 May 1949 but was his last concert as he died suddenly two months later.

Succeeding Appleby was the talented young conductor, Denis Crosby, under whom the membership again grew and enjoyed a much wider repertoire with performances of Julius Harrison’s Mass in C, Bach’s Christmas Oratorio, Dvořák’s Stabat Mater and Berlioz’ Childhood of Christ. His death in 1954, at the age of 32, was a sad blow.

The Choir under Harold Gray, OBE 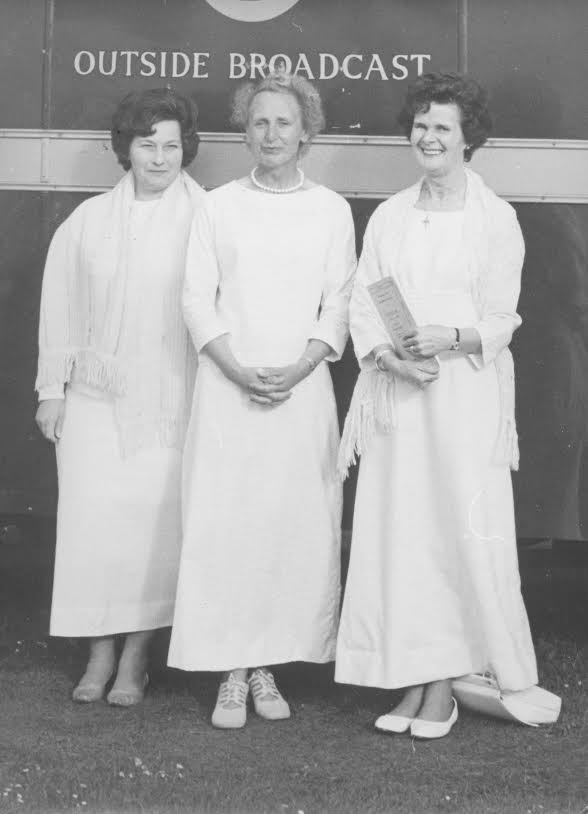 In 1967 and 1972, Birmingham Choral Union was invited to give the last concert at the International Eisteddfod at Llangollen, performing Verdi’s Requiem and Grande Messe des Morts by Berlioz. Harold’s last Concert as our conductor was Mendelssohn’s Elijah on 26 April 1975. He remained our President until his death in 1991 – nearly 40 years’ association with a delightful man.

Richard Silk took over the baton until 1978, and then David Sadler until 1981. 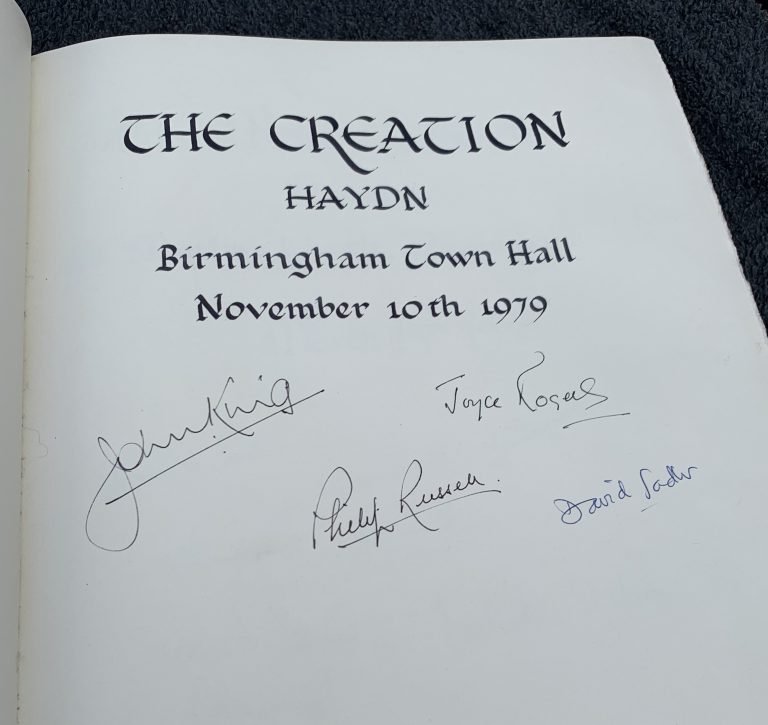 Under Colin’s baton, we have performed both large and small scale pieces from the whole repertoire of choral music in a variety of venues, accompanied by orchestras, brass ensembles, keyboard and others. 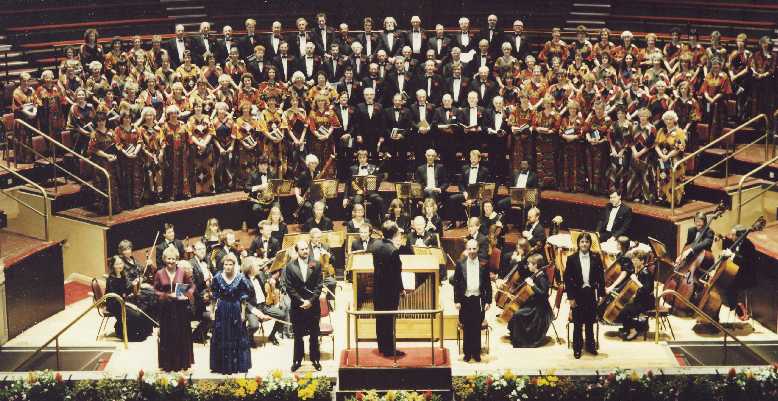 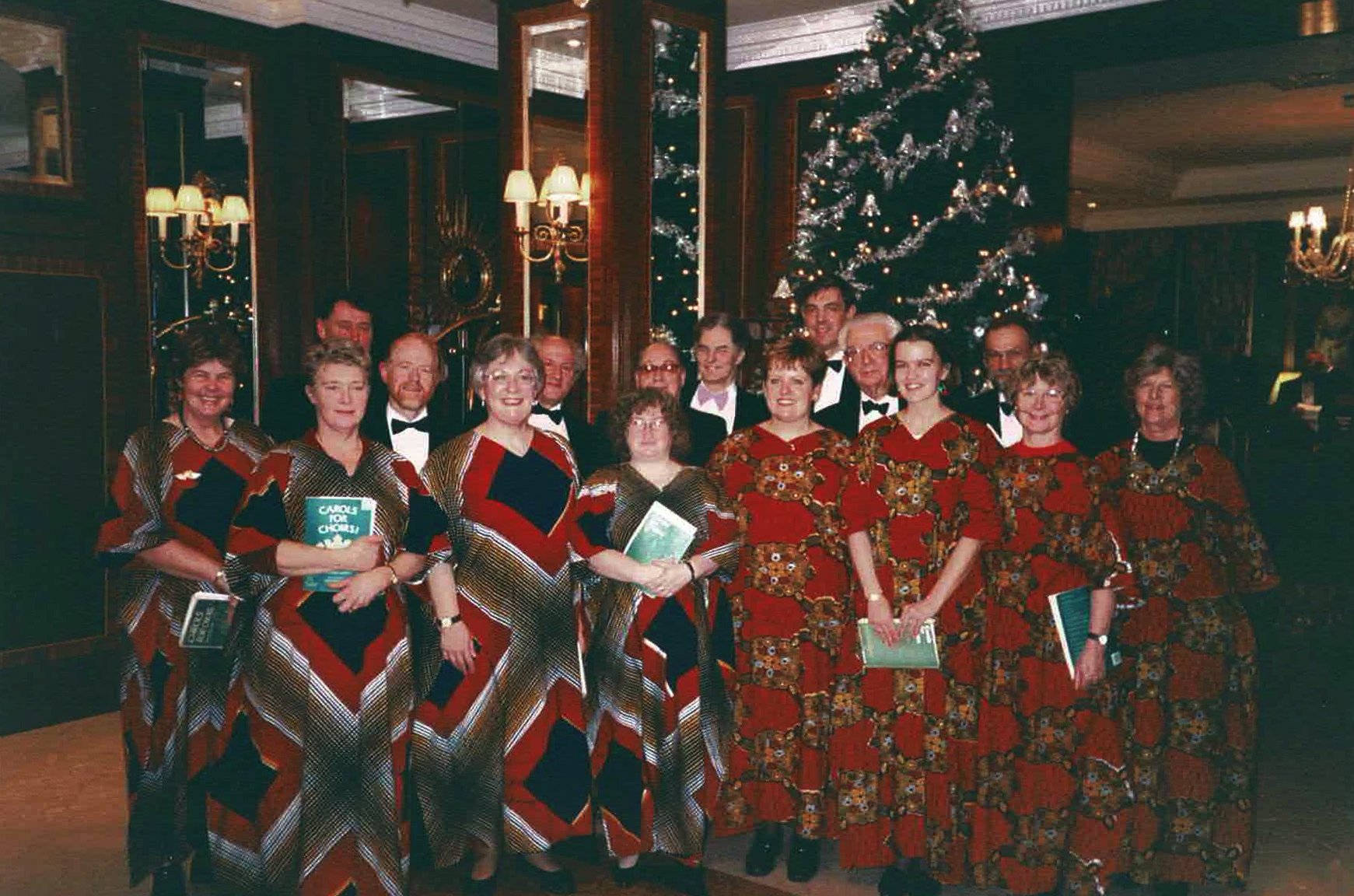 As part of Birmingham’s celebrations for the bi-centenary of the Battle of Trafalgar, we performed Haydn’s Nelson Mass and Handel’s Dettingen Te Deum in St Philip’s Cathedral.

Four performances of Brahms’ Ein Deutsches Requiem, three with orchestra, and one in 2019 with Brahms’s original piano duet accompaniment. One of the orchestral performances was paired with Stravinsky’s Symphony of Psalms, making a very special concert.

Three performances of Mendelssohn’s Elijah, and two of Verdi’s Requiem.

We have also enjoyed performing music from Blur and Lennon/McCartney, George Shearing, and many choral pieces and operatic choruses as part of the popular Raymond Gubbay concerts at Symphony Hall and NEC.

The choir has performed music composed by Colin himself, including numerous regional carols and 36 versions of While Shepherds Watched Their Flocks by Night. The annual Christmas Concerts with various bands and soloists have become a firm favourite with the choir and audiences alike. 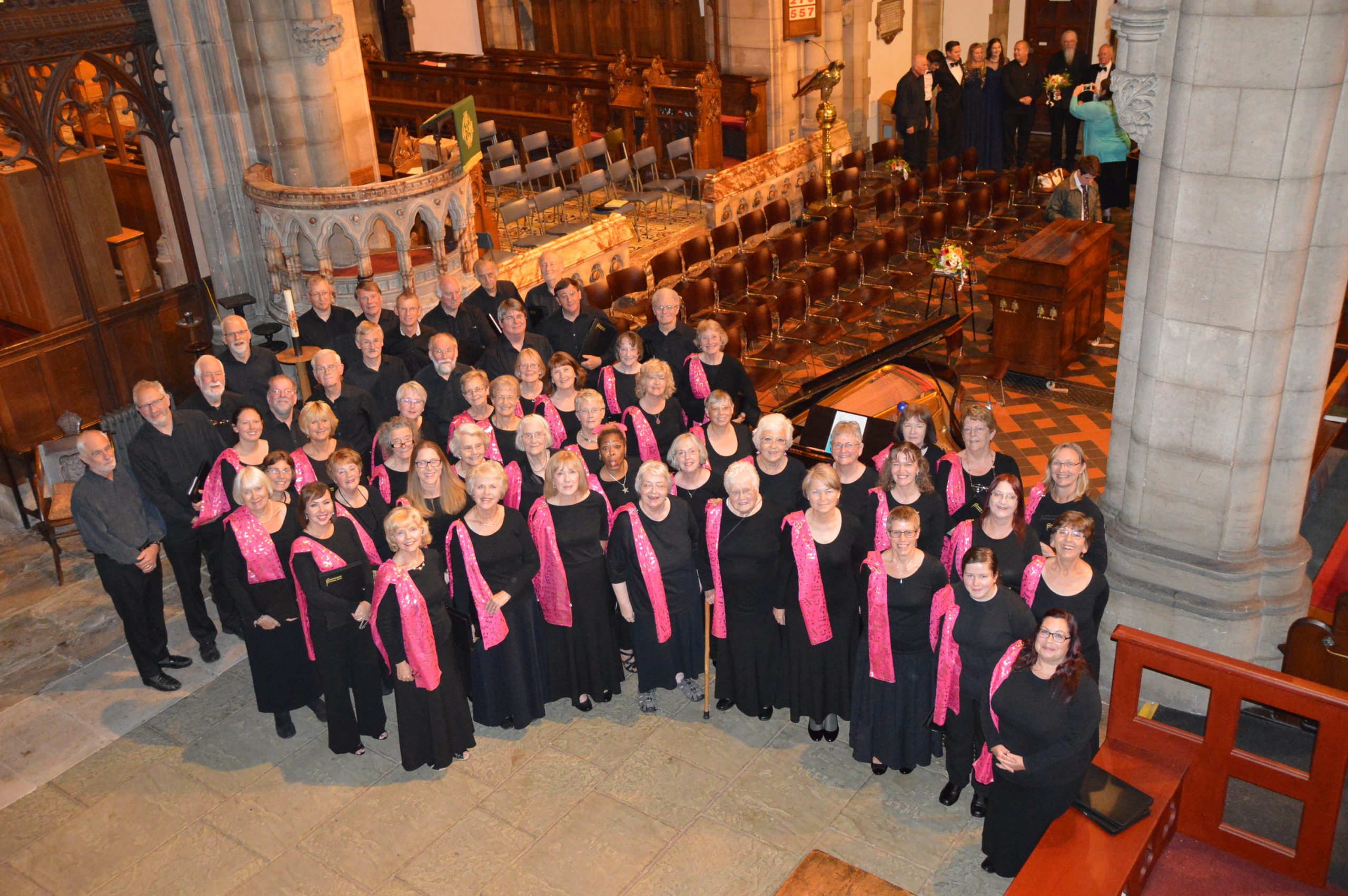 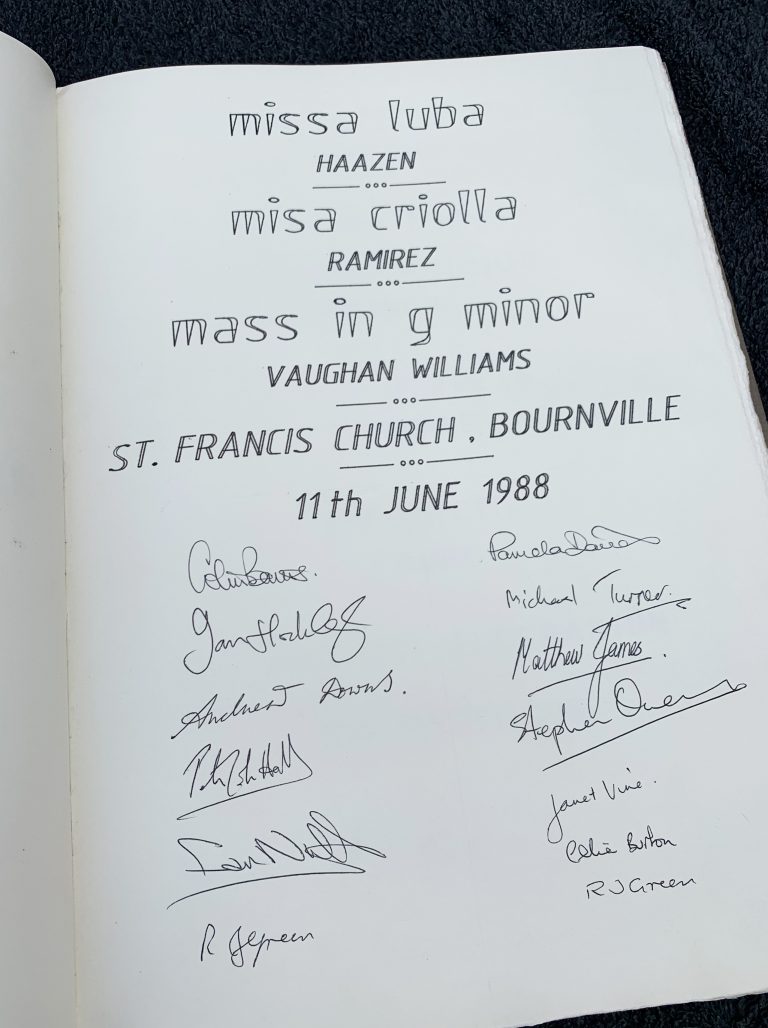 We hold an online and analogue archive of choir memorabilia, including a beautiful book that we have used to record all concerts since 1967. Our late President, Marian Dawes, carried out extensive research into the choir’s history.

Information on the choir comes from many sources – our own archives; local historians; previous members; jumble sales and book shops, to name a few! We would be delighted to hear from any former members, or, indeed, anyone with an interest in the choir and who has information or pre-1945 programmes. Please email us. 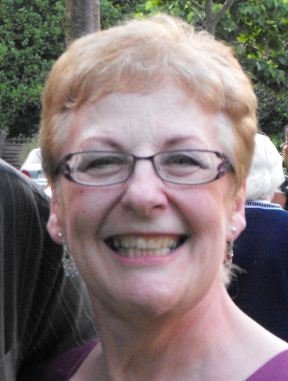